Changing of the Guard

I posted a while ago  with my dilemma about what to do with the next generation of games consoles. I’m still umm-ing and ahh-ing and not really sure about anything, but I’m getting closer.

When I wrote back in May, I had visions of a slimline HTPC doing everything. The problem I was coming up against was getting all that I wanted (specifically, good graphics performance) in a box that small. Since then I’ve been doing some more research and reading and come up with a happy medium: a mini-ITX build.

Mini-ITX is fast becoming a favourite form factor (that’s a lot of ‘f’s) for PC builders because it seems to have found that sweet spot between size and performance. I remember building my first PCs and having to decide between ATX and BTX motherboards, which were huge things. This was through necessity. You needed three or four PCI slots for sound cards, modems, network cards and the like, on top of an AGP (that was new!) slot for graphics. Now though, most of that is incorporated in the motherboards. It’s very common now to have USB3, HDMI, DVI, wifi, ethernet, 7.1 sound and a whole heap of other stuff already on the board. The only slot you need is a PCI-E one for a decent graphics card – if games are your thing.

On my window shopping trips around the internet in the last few months I’ve a rough list of the things I want to get to put in this box, but one of the most important considerations is the case itself. This isn’t going to be some non-descrit black tower sat under a desk, it’s going to be under the TV with the rest of the boxes-with-flashing-lights-on, so it’s got to be aesthetically pleasing. With that in mind, here’s the one I want: 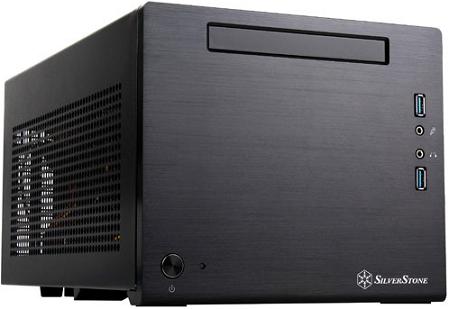 Nice eh? And it bloody well ought to be, it’s about £160!! Yeah, that’s a lot of money to spend on a case before I even put anything in it, but it does at least come with a decent 600W PSU, which is probably worth £60 of the price. On top of that (or more accurately, inside it) I want a half-decent motherboard, an Intel Haswell i5 CPU, 8Gb of fast RAM, a speedy SSD for the operating system and some select games, and at least 1TB of spinning rust storage. Oh, and there’s the small matter of a decent graphics card, which at this moment will with be something like a GTX-660 ti or a GTX-760.

This is putting my build cost at something around the £600 mark. It’s a lot of money, there’s no two ways about it, and it’s going to take some diligent saving of money I haven’t really got to do it, but hear out my self-convincing justification.

Yes, it’ll cost me about £250 more than a PS4, but I’m going to be saving the money on games. Easily. £40-50 for a new PS4 game compared to £25ish for the same thing on PC in many cases, and that difference soon disappears. Especially with events like the Steam sales, which as people will already know, have some crazy bargains on. The other thing I’ve got to think about is the long game.

I’ve had three Xbox 360s now, thanks to the failure that dare not speak its name (RROD). Luckily, MS saw fit to increase their warranty, if they hadn’t though, I’d have bought three consoles from them by now. If something goes wrong with the PC, I replace that piece. Likewise, if I want to increase the spec further down the line I can. I don’t have to, but I can. I foresee a GPU like the ones I mentioned about being ample for the job at 1920×1080 for at least two or three yeas, possibly more. The other advantage I’ve got is that as a media player, nothing will touch it. It’ll play everything.

I’ll post more updates as I manage to justify it to myself in the coming months.