After a few weeks of messed-up sleeping patterns thanks to a face full of new teeth, RAR seems to have settled down over the last few nights. Last night he fell asleep watching his current favourite – Open Season – and was in bed before half-seven.  Doing what any right-minded parent does in this rare situation of an evening and house to ourselves, I broke out a board game!

In an effort to understand and get better at the strategies in some of my games, we’re trying to play the same ones a few times in a row, so it’s always fresh and we start to know what’s going on a bit better. The current favourite is Castles of Burgundy, an awesome game from the mind of Stefan Feld. As with all Feld games, the theme is a bit tacked-on and consists of trying to build estates in medieval France. 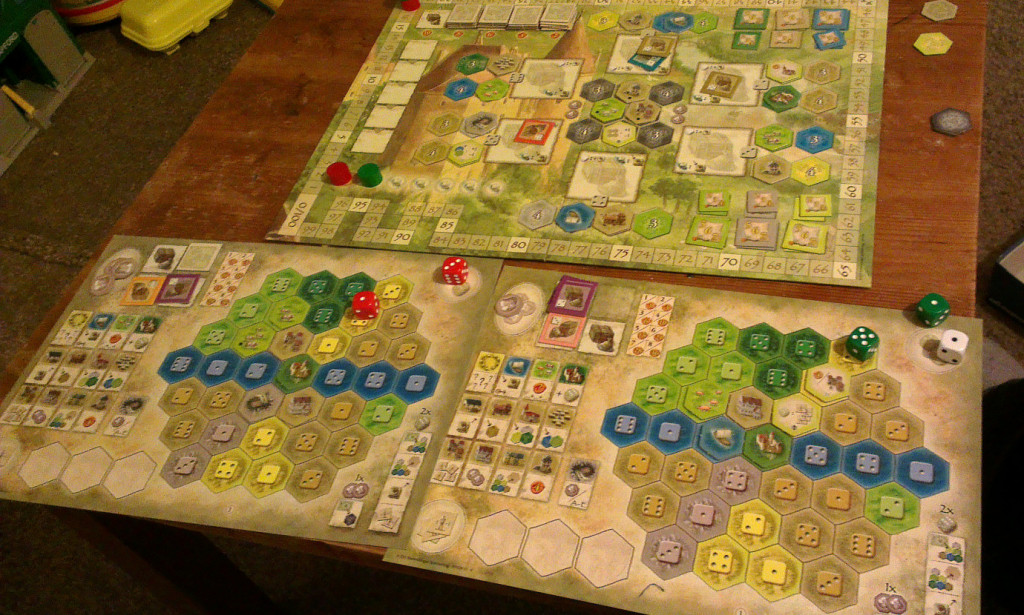 Castles of Burgundy, just at the end of the first phase. Cagey.

It’s a great game of planning and using what’s available, changing your strategy after every turn to some extent, and helpfully it’s excellent with two players.

So anyway, we’re playing and it’s going well. The game is split into five phases, each of which has five turns. The first three phases pass without too much happening, and then it suddenly ramps up and big combos start being unleashed which see your score marker rocketing around the track on the outside of the board. We had just got to the start of the fifth phase with the game practically neck-and-neck, the end game about to play out and then it happened.

… RAR was fast asleep on our bed. He tends to kip there until we go to bed and transfer him to his cot, as he sleeps better that way. He likes to thrash about a bit for the first couple of hours he’s asleep, so it means he isn’t bashing his arms or head on the cot bars. Anyway, somehow during his sleep he’d crawled/rolled the width of the bed, climbed over the pillow barricade and spectacularly dismounted the bed head-first.

Cue crying (mostly from RAR), panic, and ‘OMG what do we do? doctor? hospital? tv?’. After a couple of minutes though it was clear he wasn’t seriously hurt, mostly just rudely awoken. Unfortunately it completely threw his sleeping for the night and we ended up awake until after 3am, but that’s another story.

Suffice to say it’s not exactly how I pictured the evening going, and I’m pretty damn certain the end game of CoB was going to play out in my favour, but I guess we’ll never know. Next time Gadget, next time…