Last night I got the chance to get Fresco to the table for the first time. After Queen sent me the English instructions I’d had a read through and knew what I was doing, which was handy and kept the game flowing smoothly. 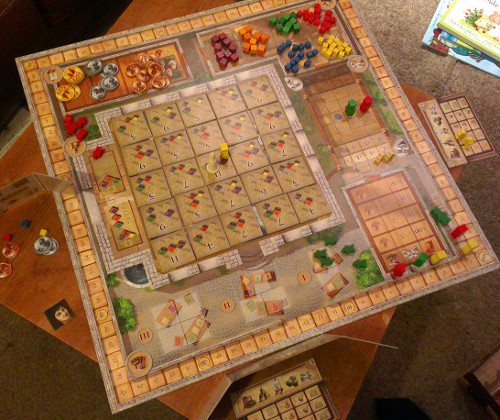 Fresco, set up for two and ready to go

What’s Fresco all about?

Fresco puts each player in the place of a master painter restoring a fresco in a Renaissance church. Not the most exciting theme for some, but it works.

Each player has three master painters that they use for picking wake-up slots (more on that later), tracking score, and tracking mood. Along with these they have five apprentices who get used to pick which actions are going to happen in that round. I’ll try and keep this brief, but this is what happens in each round, in the order it happens.

It sounds pretty basic, and I suppose it is in pracitse, but it’s really tactical. Knowing how long you can stockpile paints before you go on a restoration binge is pushing your luck a bit, and the trade-off between getting up early to get first pick at the market and restoring, against the cost of the paints and the loss of mood is a tricky one to balance. 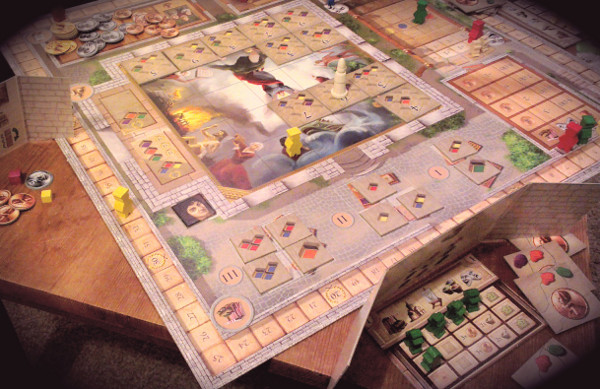 Mid-game. Lots of the Fresco restored and my apprentices deployed in secret behind my main screen

I’ve got a few games where there’s a lot of endgame scoring (Stone Age is a great example), and your plans throughout the game pay off with big ‘final round’ scoring, but this isn’t one of them. My wife was out in the lead for most of the game and kept saying ‘I know what’s going to happen, you’re going to go past me again at the end’, but it never happened. The only endgame scoring is 1Victory Point (VP – get used to seeing that abbreviation) for every two Thalers you’ve got left.

In the end, I got creamed by about 25 points, and I think as much as anything my ignoring of the mood track (and the extra apprentice you can get from there) was to blame. Next time… The two player game adds a dummy player (‘Leonardo’) which I thought would be a real pain, but it wasn’t too bad at all, it was actually quite good fun using him to try to mess plans up.

Overall, after just one play, I think I really like this one. The decisions you make are really quite tough, and this is without adding in any of the three included expansion modules. I think those will come into play once we’ve got very comfortable with the base game. The last round especially took us ages because we were running through every scenario in our heads, trying to see how to milk every last point out of the game before it ended. I’m really looking forward to trying it out with four players.