All this talk of new computers doesn’t mean I’m ignoring my other games pastime with cardboard. Back in February I had a price alert from the excellent Camelcamelcamel website, which tracks Amazon prices and lets you know when certain things hit pricepoints you set, letting me know Lords of Waterdeep had dropped below my ‘pull the trigger’ price. It was out of stock at that point, but a couple of weeks ago – and nearly two months later – it turned up on my doorstep.

Lords of Waterdeep is a worker placement boardgame set in the Dungeons and Dragons universe. It puts players in the roles of the Lords themselves, running the show around the city of Waterdeep. To win the game players accumulate victory points by completing quests (among other things), but to complete a quest you need a certain amount of gold and cubes. The different colour cubes represent clerics, fighters, rogues and wizards, and can be ‘recruited’ by placing your agents (the workers in ‘worker placement’) at various building on the map. 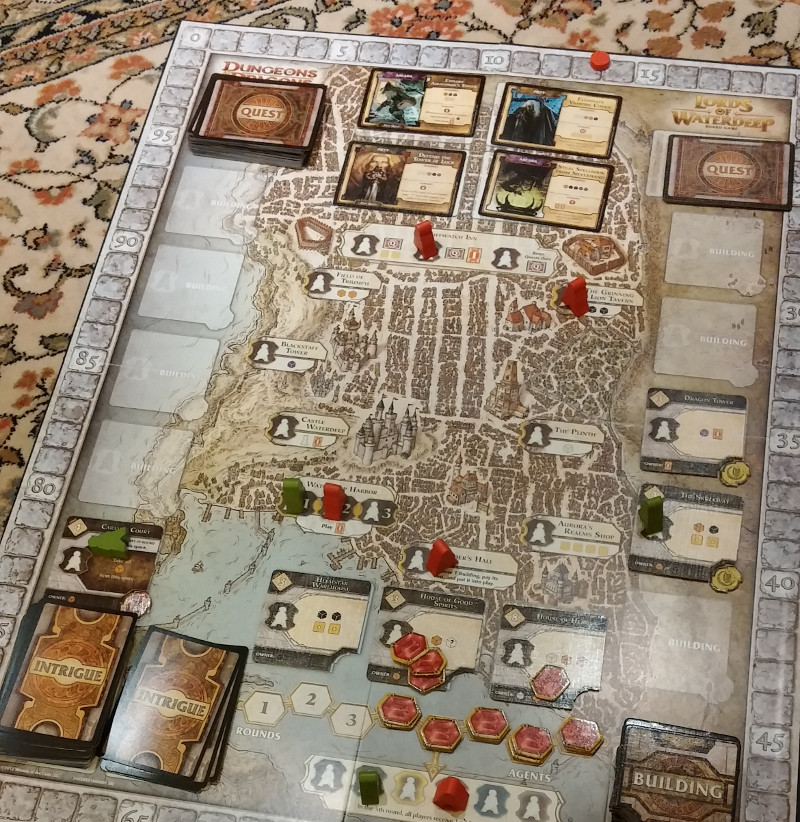 The board is pretty big, hence being on the floor this time.

What sets this one apart from the likes of Stone Age is that the map and available buildings changes as players develop new buildings and place them. Anyone can place agents on the new buildings to get the benefits, but the owners of the buildings also get a small reward each time too. Also thrown into the mix are Intrigue cards, which can either provide benefits or act as obstacles through mandatory quests for other players, and the Lord cards. Each player gets assigned a Lord at the start of the game, each with its own hidden objective. It might mean that at the end of the game you get bonus VP for every Arcane and Piety quest you’ve completed, or some other stipulation. 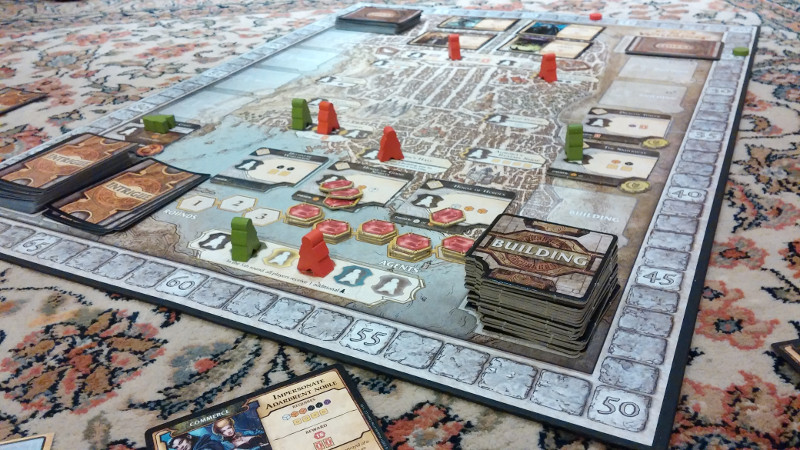 Early stages of the game, you can see the building stack and the buildings currently available.

It might not be the strongest theme in the world, let down mostly by the choice of using cubes rather than meeples for the clerics and wizards etc., but there are some third-party sites selling ‘DnDeeples’ now to fill the gap. It’s a great game though, and despite only having a couple of plays under my belt I can see how much the game changes based on which buildings come up for purchase, and which Lord each player gets assigned. A few more plays and I might consider getting the expansion too. A great game, and instantly to the top end of my ‘want to play this next’ pile.