I’ve decided that as I’m using Linux as my primary OS now, I ought to get to know it a bit better than I currently do. I’m not a complete novice by any stretch of the imagination, I’m happy enough using the shell for basics, but really I’m being spoiled by Mint and Cinnamon (sounds more like a cookery blog…) as I don’t really have to get my hands dirty at all. It’s a bit like having a car, modern distros mean you can just get in the car and drive. However, if you want more control over what you’re doing and want to be able to fix things yourself, you’ve got to open the bonnet and get to know the engine.

How best to do this then? Well, I have a very nice Mint setup at the moment that I’m not about to wreck for the sake of it, so I need something else to play with. So I’ve installed the very helpful VirtualBox to run a virtual machine on my laptop, meaning I get a ‘free’ PC to mess about with, and if I make a complete hash of it I can just delete it and start again. Nothing lost, no damage done.

I’ve been having a look around at different distros to decide which one to play with, and in the end ruled out the likes of Slackware and LinuxFromScratch, and went with Arch. Arch is a current Darling among linux stalwarts who want a bit more control over what’s on their computer, and what’s going on under the bonnet. It’s backed up with a seriously impressive wiki and forums, so almost everything is documented, it’s just a case of doing the homework when you hit a problem instead of giving up.

So far, it’s gone well. I’ve managed to create my virtual machine and virtual disk, boot from the mounted Arch install iso and use fdisk to partition that virtual disk. I managed to use mkfs to prepare the partitions, and used Arch’s awesome pacman package manager to install the base system. So far so good.

That’s where it got trickier. I wanted to build a GUI system, not just sit at the command prompt, and I haven’t tried to do that without help for probably about 10 years or so, the first time I wrestled with Red Hat and Mandrake. Ok, let’s take it step-by-step then. I know I needed X installed, regardless of which Environment I ended up with, so a quick search on the wiki and I had x.org installed. I installed the TWM basic window manager just to test it but no, it didn’t want to work!

Of course, I needed video drivers, and I know I have integrated Intel HD3000 graphics on that laptop, so duly installed the Intel drivers. Still, it refused to play ball, no X environment for me… what the hell?? That’s when it dawned on me – I’m not using the Intel graphics, not directly, I’m using the VirtualBox graphics adapter! Another quick look on the wiki and I had the relevant additions and drivers installed, and BAM! X works!

TWM is very, very basic though, and I wanted something more. I’ve got Cinnamon on my main install, have played with XFCE before too, so opted for the other big name – KDE. KDE has been up and down in peoples’ opinions like a yo-yo, but the latest version is supposed to be great, so I installed that. Pacman once again provided an interface and install just as easy as Apt, and half an hour later (and once I’d realised that I needed to use the KDM command to launch it…) I had a working, pretty, KDE desktop for my Arch box. 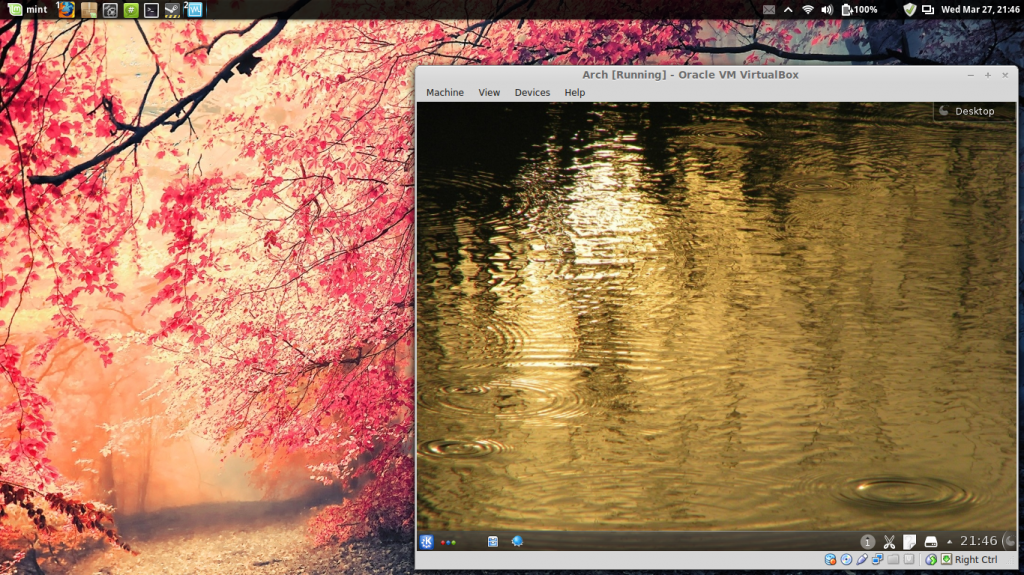 Considering that all the configuration I had to do was from the command line, with various commands and lots of config file editing with the lovely little Nano editor, I’m pleased that it went so well. I had a great guide that I found online to help out, but there were still obstacles that came up that I didn’t expect, so I’m really pleased to have gotten this far so far.

More updates as and when I break it, and then hopefully fix it again 🙂