I’ve been on a bit of a healthy living kick recently, gone are the snacks in the evenings, and my beer consumption is down to just a bottle a week. Part of this has been trying to find something good for breakfast. I like cereal but I get bored of it pretty quickly, and I find it’s just not filling enough, so I’ve been eating nice hot porridge in the mornings for weeks.

As with anything though, too much of it and you’ll get bored pretty quickly. I was chatting to someone at the office where I work and they told me to look-up overnight oats, so I did. And I’m glad I did.

If you can’t be bothered to search for yourself, overnight oats (or oatmeal for those of you on the other side of the Pond) is essentially porridge, but instead of cooking it up when you need it, you put it all together the night before and leave it in the fridge to do its thing and absorb the liquid. Then you eat it.

As disgusting as it might sound, it’s actually really, really tasty, and very satisfying. So far I’ve tried a few different recipes from my trawling of Pinterest, with varying levels of success. By far and away the best one so far is Pineapple and Coconut, which was like eating Pina Colada clotted cream.

The recipe is from The Yummy Life, so full credit to them, but here it is for your convenience. Also, I know the measurements are in US cups, and I know how annoying it is. You’ve got two options; either use a converter on your phone or a website, or do what I did and order a set of measuring cups. Less than four quid from Amazon

isn’t too much to fork out if you find yourself making American recipes. 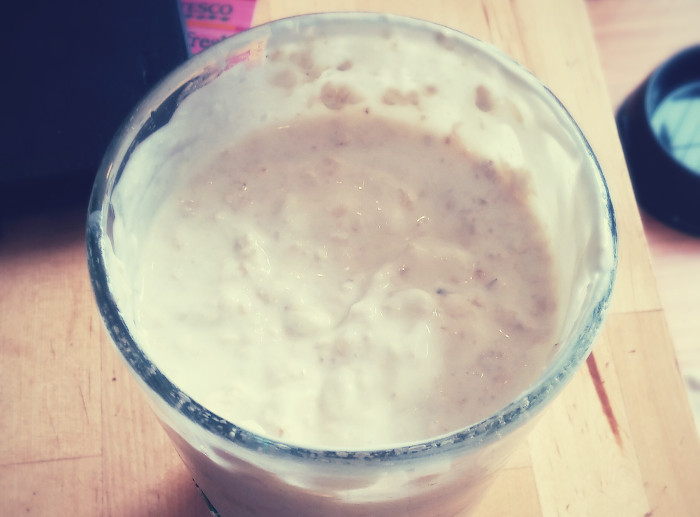 Get a pint glass if you don’t have any fancy mason jars and mix together all of the ingredients except the pineapple. Once it’s well combined, gently stir in the pineapple. Cover it with cling film and put it in the fridge overnight. Bear in mind this is at least two portions, if you try to eat it all in one go you’ll probably fall back asleep for a day or two.

That’s it. Seriously. A lot of the American recipes add Chia seeds, but these cost a fortune. I’m going to get some to try, but I’d be more tempted to use nuts or other seeds if I want a bit of bite in there. The recipe above makes a really thick, creamy breakfast, so if you prefer it a bit thinner just add a little milk or some more yoghurt.

It’s a little bit of trial and error to find the consistency and flavours you like, but once you do there’s all sorts of things you can do with it and it’s great to take to work with you for a boost later in the day. So far my favourite combinations have been the above pineapple and coconut, cherry and dark chocolate, peanut butter, apple and cinnamon and the one I had this morning, ginger and cinnamon. Way too much ginger in that one, it’s an odd feeling eating cold porridge that’s setting your mouth on fire at 7am.