I haven’t written about my little man for a while, so it’s long overdue.

RAR’s progress recently is gob-smacking, it’s almost impossible to keep up with him. Everything you say now, he can (and generally does) repeat instantly, meaning the language at home has been tailored down to a respectable PG level at all waking hours. He’s got very good at saying ‘no’, and at being able to demand things without demanding them.

That doesn’t really make sense does it? I’ll illustrate with an example. RAR is sitting in his high chair at the kitchen table eating (or more accurately, decorating the table and his entire body) his dinner. He spots something he wants on a shelf. This something could be anything from a box of raisins to a crayon, it really doesn’t matter. Rather than shouting ‘I want that! Give me that!’ like you might expect, he has a softly, softly approach.

It’s quite hard to argue with that.

We’ve got to have eyes like hawks now, as he’s very mobile, very fast, and very light-fingered. If he’s not meant to have it, he’ll definitely pick it up, and invariably try to eat it. Dog biscuits, play dough, crayons – it doesn’t matter, it all must be tasty because we don’t want him to have it, right?

This morning was a fine example. We’re cuddled up on the sofa watching TV after having his bottle. I’m half-asleep having not had my first coffee of the day and having spent the night on the sofa because an unsettled boy crashed out on my side of the bed like a small gorilla. I look down and see this… 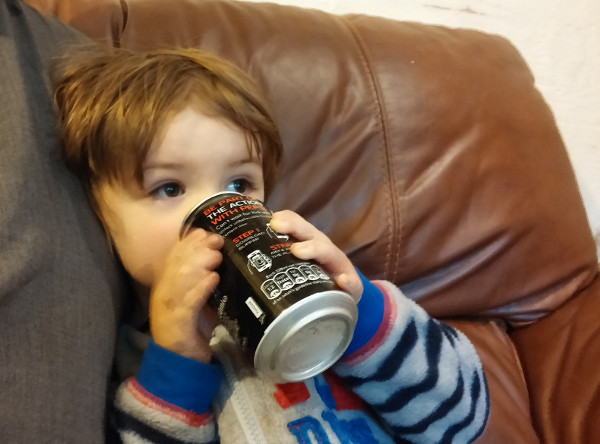 It’s in the genes!

Someone had left half a can of Pepsi Max on the arm of the sofa, and my kleptomaniac boy picked it up and was drinking it! I asked him ‘What do you think you’re doing?’, to which he replied ‘Mmmmm is deeeeliscious, bubbles mouth’.

He’s two in seven weeks, I can’t quite believe it.